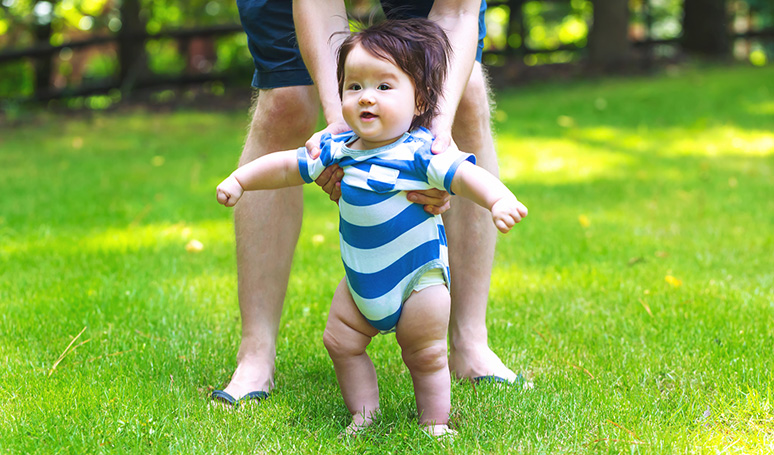 When to Expect Your Baby to Learn to Walk?

A baby’s first steps are one of the great developmental milestones of life. Most parents are desperately keen to experience it and if possible, capture it on video.

Understandably, many first-time parents have questions about just when this should be happening.

As always though, we must issue our usual advance warning. Many children don’t conform to “the rules”. They do things in their own way and in their own time. So, if your child is a little late in starting to walk – don’t panic!

The precursor to walking, crawling usually starts sometime between 7-10 months.

There are multiple theories why this happens but it is often linked to the baby wanting to get nearer to things that interest it. It’s about engaging with the wider world and it helps develop muscles and coordination.

Incidentally, don’t worry too much if your child develops their own strategy for crawling. Not all go conventionally on hands and knees. For example, some may shuffle on their bottom (which can be a bit messy where nappies are concerned!) and then go directly to walking.

At some stage, usually around 11-18 months, your baby will make the transition to walking.

All parents love to try and help and encourage their children to walk but it is far from clear whether this makes any difference to their ultimate longer-term development. Whether a child started to walk at say 12 versus 18 months, seems to have no effect on their later life intellectual or physical development.

There is some indication from studies which suggests earlier walking babies may be more physically impulsive as younger children and that in turn might indicate they’re more likely to experience minor bumps, spills and other accidents as they grow up.

However, that’s far from universally accepted and earlier/later walking is typically believed to mean little or nothing in a child’s overall development.

Of course, in spite of what we said at the outset, some parents can start to worry if their child seems to be a little late in crawling and walking.

It is exceptionally unusual for these things to indicate anything but you may wish to consider consulting your doctor if any of the following are observed in your baby by:

Most medical conditions that might play a part in inhibiting the development of walking would most likely have been picked up by the regular medical checks that babies should get in the earlier months of their lives anyway. So, there is almost certainly no cause for alarm – but asking never did any harm!

Finally, a few words on this most controversial of subjects.

Originally, the vast majority of experts were against these devices on safety grounds. However, most of those early safety issues are claimed to have been long since eradicated.

However, many (though not all) experts also argue against them on developmental grounds. Their concern is that Baby Walkers distort the processes of a child naturally learning to walk and developing their balancing skills.

Babies don’t usually need aids to help them learn to walk and whilst this must be a decision for individual parents, it might be worth getting advice before committing to some of the various walking-aid gadgets that are now on sale.