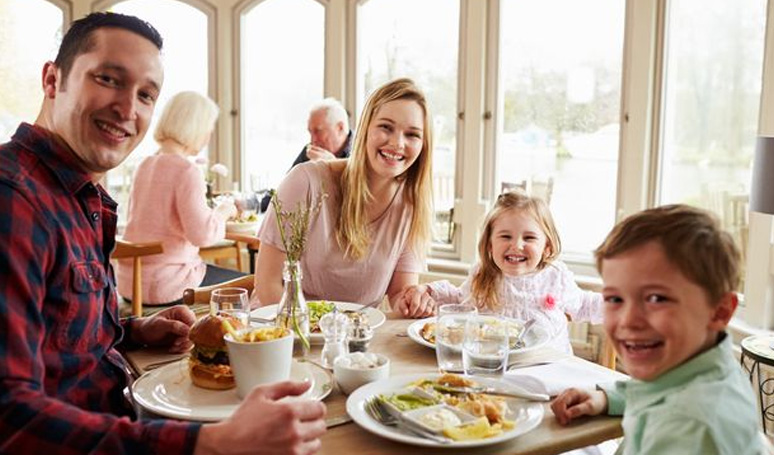 So, you’re just back from a ‘fraught’ visit to a restaurant where you feel your young children have just humiliated you by their bad behaviour in front of the entire world?

Don’t worry – you’re not alone! We have all been there at times.

However, with a few basic steps, you can reduce, though probably not entirely eliminate, such problems with a little bit of advance preparation.

Kids aren’t adults! Expecting them to sit there and do nothing other than make polite dinner conversation for an hour or two isn’t realistic.

Recognise that and allocate some time before you leave home to prepare a ‘restaurant contingency pack’. Don’t just rush out the door at the last minute and hope all will be well.

In a bag, we suggest:

3. Engage your children when at the table

One of the classic errors is to try to give your children something to occupy them while you engage in some adult-to-adult chat with your partner or others.

Younger children want regular attention from their parents. If they think they’re being cut out of things and fobbed off with toys, while the grown-ups isolate, they will start to play-up and seek attention.

Instead, engage them constantly in events. Talk to them about the food, décor, waiters and other general conversation. If you do need to resort to crayons, try to stay engaged with them while they’re drawing.

In passing, be very sparing with your permission for them to use play areas in restaurants. They can encourage the view in kids that the table is something to be escaped from and which isn’t fun.

In cultures that originate from the British Isles, although things are changing, there is a tendency to see younger children as being “too young” to go to a restaurant.

By contrast, in much continental European and Asian culture, that would be unthinkable. It’s possible in those cultures to see babies just a few weeks or months old at the tables of restaurants.

Of course, all parents need some private time and their escapes but it’s a sound idea to get your children used to sitting and dining in restaurants from the earliest ages. It makes the environment less strange for them as they become toddlers.

5. Broaden your cuisine at home

One of the classic nightmare scenarios for parents is the child who refuses point-blank to eat anything in the restaurant or who insists upon unavailable options.

There’s no easy answer to this but expect issues if your child sees a radically different foodstuff or presentation style for the first time in a strange environment.

If you’re planning a trip to a Chinese restaurant for the first time with your child, try some days beforehand to have prepared them a meal including noodles and at least some Chinese sauce or spices. That way they won’t be shocked and react negatively.

6. Attend to bladders and bowels

After ordering, insist that your youngster goes to the toilet with you – whether they say they need it or not. This is not usually good practise at home but you’re not at home!

If you don’t, anticipate them demanding to go just as the food is being served and you’ll spend a lot of time in the WC with them as your food congeals and goes cold on your plate.

In truth, this doesn’t always work but it sometimes does!

Finally, remember to show you’re enjoying yourself and having a great time – even if the food was dreadful!

Eating out should be a family fun event and you want your child to see it as such. If they do, it’ll reduce the likelihood of future misbehaving.