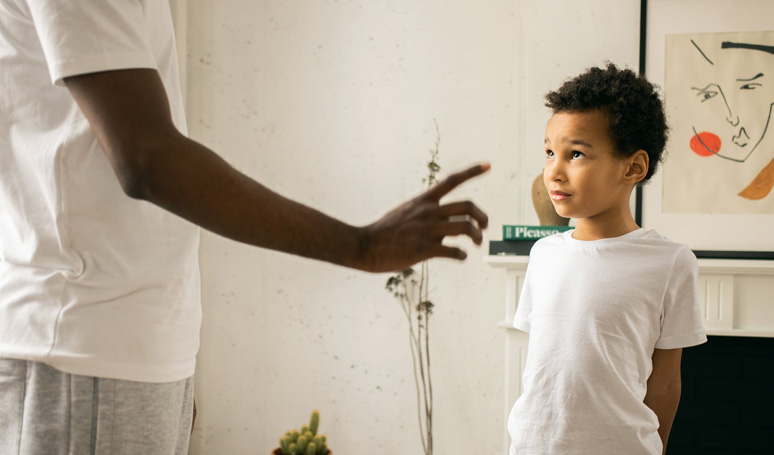 A lot depends upon the exact nature of the cause and of course, your child. Yet choosing the wrong strategy can be counter-productive.

So, here are the top 10 common mistakes parents make when telling their child off.

It can be very challenging to avoid losing your temper but do try.

Being furious and shouting at your child will serve little purpose because they’ll just become frightened and stop listening almost immediately.

Stay calm and explain instead why you’re upset.

Getting irate with siblings if they start fighting in a shop won’t make a lot of sense to them if you ignore such squabbles in the home.

Try to keep your sanctions proportionate. A child that has just been a little cheeky but receives a “right, no ice cream for a week” type response, may struggle to relate the punishment to the transgression.

This is very commonly seen. It usually is manifest in things like the “if you stop being naughty, I’ll buy you some sweeties” syndrome.

This just gives children the entirely wrong message and will be interpreted as rewarding the bad, not the good, behaviours.

Perhaps the best examples of this are those who give their child a telling-off for using bad language but who then regularly use it themselves. It’s even sometimes possible to hear parents swearing at their children as part of telling them off for swearing!

If you tell your children something is bad and they mustn’t do it, you need to guard against them seeing you ignoring your own rules. At best, they’ll become hopelessly confused.

One exception to this – things that are safe for adults but not children, such as handling knives in the kitchen etc. In such instances, make sure you explain why you can do it but not them.

You may sometimes have to act quickly and publicly if your child is doing something dangerous or particularly bad but as a general rule, try not to dress them down in front of others.

This just humiliates them and causes the message to be lost in resentment. Instead, park the lecture until you get home.

Make your telling-off short and to the point. Keep it simple too.

Kids have a limited attention span so if you’re moving into the 5th minute of your lecture, you can be sure they’ve heard little of it for about the last 3 minutes.

This is a well-known piece of psychology but people, including small ones, tend to respond better to positive rather than negative messages.

Instead of “don’t throw your gloves on the floor” try “please put your gloves tidily away when you’re finished with them”.

OK, all parents have been there – trying to correct a child for a transgression that was far funnier than it was worrying.

Nevertheless, it really should be taken seriously and try to keep a serious face and voice tone. If not, your child might think you’re giving them covert ‘carry on’ signals.

Finally, remember that if you say ‘no’ or issue a sanction for misbehaviour, then you must follow it up.

If you say “no sweeties today” then be sure you deliver on that rather than forget it or weaken and ignore it.

If you don’t, your child might not take you seriously in future.