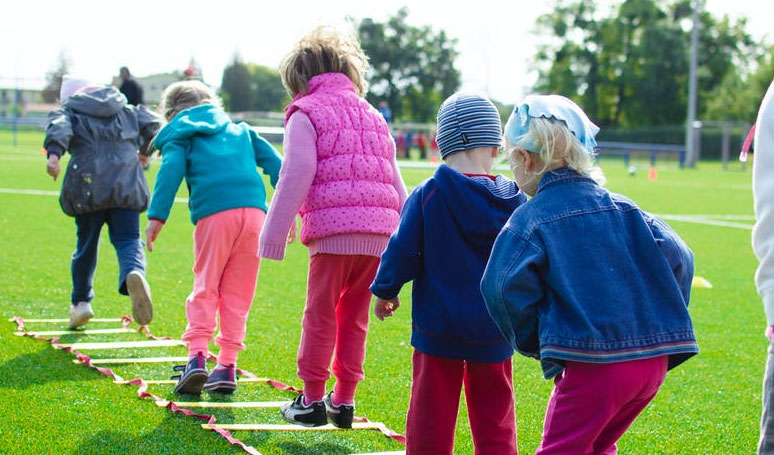 Freedom of choice with physical activity for young children

Firstly, we need to define what we mean by “physical activity”.

As almost every parent has discovered, trying to get a younger child to undertake exercise they’re not interested in, can be a nightmare. You’re unlikely to be able to ask your 4-year-old to go and do some squatthrusts!

The good news is that most parents don’t need to try because given even half a chance, most youngsters will run themselves to exhaustion.

The secret is to try and give them as much opportunity as possible to play in a physical way. If they’re playing physically demanding games, most children will happily run and jump for hours without you needing to say a word.

What exercise is needed?

Your children should be moving more or less regularly from the time they’re able to crawl. Most experts suggest:

The risks of technology

Even if there is considerable disagreement amongst specialists as to the psychological effects of too much technology on a child’s development, there is a general consensus that too much time spent on computers and phones IS harmful if it means lots of reduction in physical playtime.

There are many factors that might influence your views of how much time your younger child should spend watching videos or playing computer games. However, a powerful warning sign would be if they start showing aregular reluctance to play physical games outside preferringinstead to spend time sitting watching a screen. Should that happen, you may need to take some action.

It is possible that a child’s seeming reluctance to participate in physical exercise is attributable to one or more medical conditions.

It can’t be stressed strongly enough that this would be unusual but it is not impossible.

So, if your child seems unwilling to undertake much physical activity, even if you can’t see any obvious cause, it would be sensible to consult your doctor.