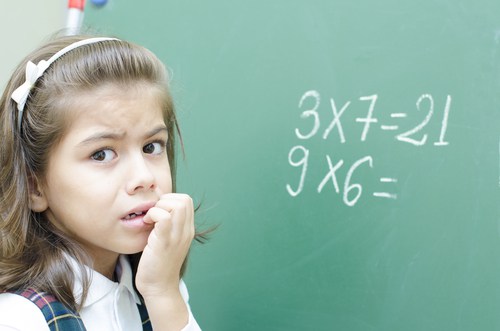 Is your child frightened of numbers?

One thing we hear a lot of from parents is “our child doesn’t like numbers”.

Well, there’s no cause for alarm!

According to experts, children in pre-primary care should have started to pick up certain characteristics of numbers and basic arithmetic.

Obviously, there is an age issue here and no two kids are the same! However, by around 4-6 years old, children should be starting to understand things such as sequences and proportions.

However, some children even at that young age can appear to struggle with basic number concepts. This usually means nothing at all but in older children, if that tendency is continued, there are two separate conditions that might be having an effect:

Maths anxiety – this can be seen in some pre-teen children. It just means that a child is intimidated by numbers in some circumstances, such as classrooms or in front of their friends.  It may have nothing whatsoever to do with their ability to manipulate them and do basic arithmetic.

Dyscalculia – this is an entirely different thing. It’s a learning condition which means the child finds it difficult to understand and use numbers. They may be performing well in all other areas such as reading and language but simply struggle to manipulate numbers.

What causes sole kids to have trouble with numbers?

Maths anxiety is a learned state of mind.

It can be picked up in the home via well-meaning “numbers are really difficult but you’ll be fine” type statements or perhaps more commonly from the child’s peer group “I hate arithmetic – it’s too hard and I can’t do it” etc. Early best-practice of teaching numbers through play is often key to avoiding this.

Dyscalculia is a poorly understood cognitive condition, which affects the capability of the brain to manipulate numbers. Scientists estimate that about 7% of younger children suffer from it and it is believed to be genetic.

It is entirely unrelated to dyslexia. It has nothing at all to do with intelligence and can even affect children who are extremely gifted in other subjects.

How to recognise it

If a child is very young, you can say nothing with certainty.

In the case of pre-teen slightly older kids, the symptoms of both conditions may massively overlap (e.g. doing poorly when working with numbers).

One tip is to look for whether or not the child can use figures well at times, for example at home but not at others, such as in class. If that is the case, they may have maths anxiety.

If the child is consistently unable to learn basic number manipulation and arithmetic or struggles to understand concepts such as parts of a thing or that 8 is more than 3, they may have dyscalculia.

Don’t jump to conclusions though! Your doctor can refer you to a specialist who could make a firmer diagnosis.

Maths anxiety can be handled via sympathetic coaching and teaching. Techniques to boost self-confidence also can help make huge improvements.

While there is no universal treatment for dyscalculia, it has been shown that significant improvements can be achieved by support and:

Remember, children with dyscalculia often have no other learning difficulties whatsoever.